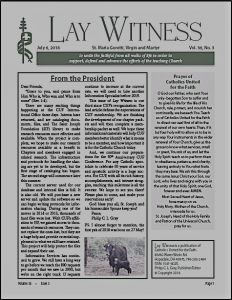 Our Lay Witness newsletter is a quarterly publication intended to assist in the formation of the laity; to examine, in the light of the official teachings of the Church, important issues of concern to Catholics; to help direct and coordinate the efforts of members in carrying on their work.

Beauty abounds at The Apostolate for Family Consecration.

Nestled in the rolling hills of Eastern Ohio, the grounds of Catholic Familyland offer a peace and tranquility that can only cause one to marvel at God’s handiwork. Located on the grounds of the former Diocese of Steubenville’s St. John Vianney Seminary, The Apostolate for Family Consecration offers scenic views, walking paths, prayer gardens, and more. Refresh your heart and renew your spirit during this one of a kind weekend experience by joining us for our 50th Anniversary Uniting the Faithful Conference. 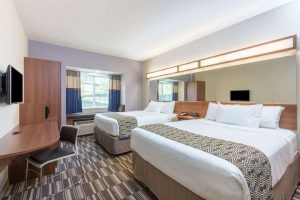 Catholics United for the Faith has made a number of room block reservations at area hotels. Because Franciscan University of Steubenville will be hosting an event on the same weekend, hotel rooms in the area will be in high demand. Therefore, we highly recommend that CUF Conference participants book their hotel accommodations before August 1, 2018. Block reservations have been made at the following hotels for your convenience:

The below hotels are not able to offer block reservations but offer accommodations near the conference.

Our president, Philip Gray, was thrilled to sit down with Michael Roberts, host of Living Bread Radio’s Catholic Close Up to discuss the mission of Catholics United for the Faith, what brought Philip to his apostolic work, and our upcoming Uniting the Faithful Conference! Listen to the full interview with no commercials here.
The Living Bread Radio Network faithfully broadcasts the message of Jesus Christ and His Church to northeast Ohio. In the Canton, Akron, and Cleveland areas, listen at AM1060 and 94.5FM, in the Youngstown area,  89.5FM or listen anywhere at livingbreadradio.com.

Prayer of Catholics United for the Faith 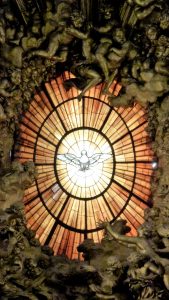 O God our Father, who sent Your only-begotten Son to suffer and to give His life for the life of His Church, rule, protect, and nourish her continually, we beseech You. Teach us of Catholics United for the Faith to direct our zeal first of all to the renewal of our own hearts. Then, if it be Your holy will to allow us to be in any way your instruments in the wider renewal of Your Church, give us the grace to know what services, small or great, You ask of us, and let the Holy Spirit teach us to perform them in obedience, patience, and charity, leaving entirely to You what fruits they may bear. We ask this through the same Jesus Christ Your Son, our Lord, who lives and reigns with You in the unity of that Holy Spirit, one God, forever and ever.

Revitalize your Faith! Fall back in love with the Church! Refresh your heart and renew your spirit during this one of a kind weekend experience. Help us celebrate 50 years of apostolic service, and join us for beautiful Masses, a Eucharistic procession and adoration, enriching talks, and uplifting fellowship! 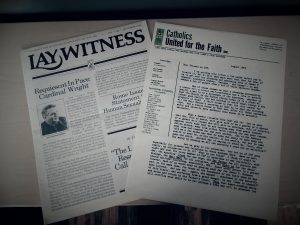 We are excited to announce that we will be opening the CUF Archives to our conference guests!

Explore CUF’s rich history and view rarely seen letters by H. Lyman Stebbins. Composed of letters, photographs, early Lay Witnesses and more, the CUF Archives provide a glance into the past work carried out by members of Catholics United for the Faith.

Fr. Joseph was born in Columbus, OH, in 1967 and was raised in Canton, OH. He entered Borromeo College Seminary in 1986 where he earned his Bachelor’s degree in Behavioral Sciences in 1989. In 1990, he professed his first vows as a Capuchin Franciscan friar. Making his Perpetual vows in 1993, he went on to earn his Master’s degree in Theology at the Washington Theological Union in 1995 and was ordained to the priesthood in 1997 in Pittsburgh, PA, by Donald Cardinal Wuerl, now of the Archdiocese of Washington, DC.

Fr. Joseph’s first assignment after ordination was on the Pacific island of Papua New Guinea where he served for four years with our friars of the Custody there. Returning to the US in 2001, he has served in various capacities as Parochial Vicar, Military and Hospital Chaplain and as Pastor.

Most recently, Fr. Joseph worked with our friars in the Custody of Puerto Rico and currently serves as a full-time Minister of the Word and Evangelization for our Capuchin Province, offering retreats and reflection days for parishes, Religious and Priests.

Pope St. John Paul II Chair of Theology for the New Evangelization at The Augustine Institute

Speaking On: The Bond of One Faith

Following graduation from the College of St. Thomas in St. Paul, MN, with a B.A. in Philosophy (1976), he studied under the Pontifical Faculty of Theology of the University of Fribourg, Switzerland, and was awarded the Licentiate in Sacred Theology degree (1980).

Prof. Bushman is past director of the Institute for Religious and Pastoral Studies (University of Dallas, 1992-2001) and of the Institute for Pastoral Theology (Ave Maria University, 2001-2004, 2005-2013). In 2004 he was Executive Vice President for Mission for Relevant Radio. He served as Director of Education for the Diocese of Duluth, MN, coordinating and teaching in programs of formation for adults, Catholic school teachers and administrators, catechists, and candidates for the permanent diaconate. He has contributed articles to a number of Catholic publications, including Lay Witness, Magnificat, Catholic Faith, Catholic Dossier, Catholic World Report, and Homiletic and Pastoral Review. He is the author of introductions for The Sixteen Documents of Vatican II (Pauline Books & Media, 1999), and the In His Image Program of Renewal through Education (Ignatius Press, 1989/1990).

Prof. Bushman is well known for his content-rich and inspiring lectures, presentations, missions, and retreats. He also contributed to the translation of the Catechism of the Catholic Church into English.

Speaking On: Bond of Common Worship

Abbot Philip Anderson (born in 1953) is the Superior of the Benedictine monastery, Our Lady of Clear Creek Abbey, located in Hulbert, Oklahoma, in the foothills of the Ozarks.  He grew up in Prairie Village, Kansas, a suburb of Kansas City, and attended the University of Kansas, where he was part of an experimental course of studies for undergraduates called the Pearson Integrated Humanities Program (1971-1973).  In association with this particular university program, there was a wave of conversions to the Catholic Church. He was one of these converts, as was Bishop James Conley of Lincoln, Nebraska.  Archbishop Paul Coakley of Oklahoma City, although a “cradle Catholic” and not a convert, was part of the program as well.

After serving a two-year enlistment in the United States Marines Corps (1973-1975), he joined some other graduates of the Pearson Program at the University of Kansas, who had entered a contemplative Benedictine monastery in France, Notre Dame de Fontgombault Abbey.  After completing his formation and being ordained to the priesthood in 1984, Father Anderson was sent with others to start a new monastery in southern France, Notre Dame de Triors.  He served there as Prior, Novice-Master, and Lecturer of Moral Theology—not to mention working in the chicken-coop and the vegetable garden.

In 1999, Father Anderson was sent back to America along with twelve other monks, including eight Americans, to found Clear Creek Monastery in the diocese of Tulsa, Oklahoma, which has since developed into a thriving community of fifty monks. A number of families have moved in around the abbey, forming the beginnings of a Catholic village. The monastery was raised to the status of abbey in 2010, when Father Anderson was blessed as first abbot of Our Lady of Clear Creek.